The Circus is Coming to a Town Near You. 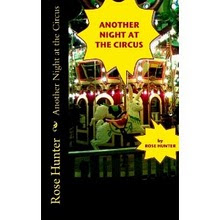 I've got that hands in pockets scuffing in the dirt kind of feeling since finishing the script and today the weather is very hot-hot. There are of course many other things I could be working on but...just can't quite raise an eyebrow to them at the mo'. Considering I've not actually posted the damn thing anywhere yet I suppose I ought to get used to the waiting or better still fill the time with something useful. At least I'm reading again, I find I can't do both, read and write at the same time I mean but then I always was an all or nothing kind of girl.

What was that...? Oh, sorry, it's called Another Night at the Circus by my good friend Rose Hunter.
You can find her over at: http://rosehunterblog.blogspot.com/ Now don't get me wrong, I like to think I've lived but Alex, the main character in the book, well this girl has really lived and I have to say that reading about her adventures puts me in touch with my wild side, she gives a girl a sense of liberation, of being in control of her own destiny even when the going gets tough - and it does. When I pick up this book I want to let my hair down, put my shades on and just go with the flow. It's a good feeling, you should try it.
Posted by T.M. Curzon-Manners at 16:40 8 comments:

Email ThisBlogThis!Share to TwitterShare to FacebookShare to Pinterest
Labels: Review.

For those of you who drop in here from time to time, (thanks by the way,) you'll know that the posts have been a bit few and far between recently due to me putting every spare hour into developing a script idea. Well, the script is finished in as much as I've done and given all I can to it and today I handed it to my boss at work who has very kindly said he will read it. I feel sick and excited all at the same time.

I've worked in a box office for more than twenty years, ridiculous isn't it that it should take me until now to discover resources that have been staring me in the face all this time? Quite frankly I blame it on the kids, they will insist on being fed and clothed, then there's the bills to pay and before you know it dreams are shelved and become something you dust and chat about with friends every now and then...

A couple of years ago my steady, not unhappy world was rocked by the news that jobs in the box office were going to be streamlined which meant only one thing, redundancies. If I was going to make this writing thing work I needed to get a move on and so Boxofficegirl the blog was born. If I hadn't done that I would never have met Brad or through him Don who pointed out to me that I was not a novelist but rather a dramatist and maybe should spend some time working on that direction. You're not a Horse dear, go play with the Ostriches. I wrote to Don recently to thank him for the nudge into the next field, he underplayed his role as I knew he would but promises to be there on opening night. If there ever is such a thing I will most certainly hold him to his word; and if it all goes pear shaped?

Email ThisBlogThis!Share to TwitterShare to FacebookShare to Pinterest
Labels: Writing.

Measure for Measure
"Our doubts are traitors, and make us lose the good we oft might win, by fearing to attempt". - (Act I, Scene IV).
(William Shakespeare)
Posted by T.M. Curzon-Manners at 21:15 2 comments:

I launched my balloon By the Aqua Lagoon and Sailed away on the breeze. Beneath me the moon Cast shadows in tune To the swell of the o...