I'd like to draw your attention to the picture of the Theatre auditorium on the right.

As you can see it has been take from the stage to show the full breadth of the Stalls, Dress Circle, Upper Circle and the dizzy heights of the top Balcony.

At one time or another I must have sold every single one of those seats a thousand times over for hundreds of different shows. I've even sat in a few of them too. I can tell you about full views, just off centre, semi-restricted, easy access, disabled seating, which side to sit for a quick getaway or for nipping to the bar or the loo and discuss whether a right side aisle or left would best suit your knee replacement not to mention problems with hearing and sight from this ear or that eye. There is no such thing as a silly question when it comes to booking theatre tickets - not as far as the punters are concerned anyway.

For reasons that I cannot quite fathom I've worked in box-office for over twenty years. First in London at The Royal Opera House and for the past nineteen years here at The Royal Centre in Nottingham which is made up of the Theatre Royal and Concert Hall and can be seen in the picture below. 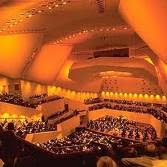 Every day I think about leaving in favour of pursuing my chosen career...? Each day I turn up for work and plug away alongside my colleagues and question the method in our madness, for madness it surely is, to do the same thing day in day out in a world that can be fraught with anxiety one minute and have you rolling (literally) in the aisles the next. The adrenalin rush of those last few minutes before the House Manager calls backstage to give them the GO as late arrivals come charging through the front doors in sheer panic without tickets, without knowing where they're supposed to be seated or whose name they booked under. Usherettes querying what looks like a double booking until it transpires that Auntie Nelly forgot she had given her tickets to both Colin and Fred plus guests; or a small child crying because the House lights went down and it was all just a bit too dark and scary so demanded to be taken out before the orchestra came to life and the stage lights came up to reveal all the magic that had been promised.

In days gone by if anybody asked what I did for a living I would say something like: 'Well, at the moment I work in a box-office but it's only a stepping stone until I figure out what I really want to do.' And they would be impressed and ask the usual questions like: 'I bet you get to see all the shows! Or, the real question they want an answer to...'Can you get me any tickets?'

These days if I'm asked I generally say something vague like: 'Oh, admin.' Trust me, it's easier.

The truth is I'm quietly content with my lot. I like what I do. I like where I do it but more than that, I'm good at it because I understand people and their needs which can be more of a drama than the one they're buying tickets to see in some cases. This window into other peoples lives fuels my creative drive some days and just about kills it the next but I wouldn't want to be anywhere else.

Email ThisBlogThis!Share to TwitterShare to FacebookShare to Pinterest
Labels: Work.

Comments which are constructive and relevant are very welcome but unsolicited links and advertising will be removed and blocked.

I launched my balloon By the Aqua Lagoon and Sailed away on the breeze. Beneath me the moon Cast shadows in tune To the swell of the o...